The little town of Collesano in northern Sicily was once a famous hub of ceramic arts, the local majolica-style floor tiles and friezes making the region’s artisans a celebrated force to compare with any on the island. This industry declined with the advent of mass production in the twentieth century, but has been experiencing a renaissance in the past few decades.

We mention this because the rediscovery of the traditional craft was thanks, in large part, to the work of one ceramicist, who happens to be the brother of Appartamento Garibaldi’s owner. The beautiful colours and intricate patterns of his handiwork are on display throughout the apartment, with Sicilian ceramics prominently features.

Realtors are occasionally guilty of overusing the word ‘unique’, but it’s never more justified than in this gem of a two bedroom apartment. With ample light and an efficient use of space, a southern aspect offering the full glory of the warm Sicilian sun all through the day, and the decorative touch of a master, this is an opportunity to purchase a piece of living history at a fabulous price.

On the top floor of an ornate Sixteenth century palazzo building once belonging to a noble family, entry into Appartamento Garibaldi (directly off the piazza from which it takes its name) is through a grandiose double doorway into a shared lobby.

The top floor apartment consists of five rooms in a fluid, seamlessly interconnecting floor plan – a style typical of the homes of the nobility in historic Sicily. This means that every room (save the compact bathroom, to the rear,) has at least two entrances. Light carries easily throughout, and minimal space is lost to passageways.

The largest space is a living room with dual centrepieces. The large French window which opens onto the terrace pulls the focus by day, while the imposing open fireplace draws the gaze and warms the whole home after nightfall. In the middle of a feature wall of exposed masonry, it’s a simple design classic which you’ll certainly want to retain.

The terrace measures around 15m2, and is covered by a simple bamboo awning to protect from the beating summer sun. It also connects to the master bedroom. An idyllic view of the piazza and the terracotta rooftops of Collesano is only bettered by the green hills rising up to surround the town.

The bedrooms are spacious, the master at the front and a guest bedroom (currently used by the family’s young children) next to the bathroom. The kitchen has its own small balcony with a hillside view.

As we mentioned above, the majolica ceramics used to finish the space are absolutely priceless, and the vibrancy and texture of the ancient craft makes floors, wall highlights and the kitchen’s blue and white backsplash into bold statement features. Only the bathroom is tiled in a more contemporary, neutral style. This kind of apartment, with Sicilian ceramics, oozes character and individuality.

Finally, the apartment benefits from two extra storage spaces. On the ground floor of the building is a 21m2 room which was once a stable, as the ancient feeding troughs will testify. Up the impressive shared staircase, on the first floor, is a smaller 16m2 space.

Appartamento Garibaldi’s infrastructure is very modern for its position and age. The windows are in good condition PVC, with double glazing. It is wired with fibre-optic cable for high-speed internet and satellite TV. The connections for water, gas and drainage are all in good working order. The roof has been restored in the recent past, and there is heating from radiators, air conditioning units and of course the open hearth.

Sold unfurnished, except for a few major pieces like the glass-fronted dresser in the living room, but full of character, this property is a fascinating proposition – like a blank canvas with an ornate border. It would support all manner of furnishing styles.

Collesano, a small town of around five thousand, lies tucked amongst the surprisingly green hills of the Madonie National Park. This apartment is in one of the nicest areas of the town, on a charming little piazza with a lovely rebuilt church. The small urban centre extends ahead and to the right, whilst opposite, a palazzo which was recently bought by the municipality has been earmarked to make a museum of visual arts. Right next to Appartamento Garibaldi’s building is a museum dedicated to the local ceramics industry.

The community has a profoundly traditional, timeless atmosphere, with many families having lived here for generations. However, all the normal amenities are in ready supply, with local shops, supermarkets, bars and pharmacies. There are schools for children of all ages, and a tight-knit community.

Collesano became famous in the twentieth century as the world’s first ever sports car race, the now-legendary Targa Florio, wound through its streets. The rally, still contested to this day by both modern and classic vehicles, is extensively documented in a museum in the centre of the town.

As well as being superb driving territory, the Madonie is an area of outstanding natural beauty, and a popular destination for hikers, who enjoy trails up to 2000m above sea level. Trekking, mountain biking and paragliding are also popular all year round, with skiing and snowboarding possible in winter. Dotted with numerous storied towns and charming villages, you could explore the area for years without ever running out of ideas.

If you’re worried that your Italian skills won’t be up to the challenge of interacting with the locals, the friendly and nationally-recognised language school Solemar Academy is just up the road in Cefalù. Their trained, all-native speaker staff would be delighted to help you get to grips with the language. Nor will you be alone: in recent years we have sold around a dozen properties within a few kilometres of Garibaldi, and this has created a small community of expats in the area from the US, Germany, Sweden and all walks of life.

The nearest beaches can be reached in a twenty minute drive, and this stretch of coastline has a glorious variety of beaches and coves. Cefalù, a tourist hotspot that guarantees interest in vacation rentals, especially between June and September, has perhaps the finest: two kilometres of unspoilt sand in the shadow of the medieval old town and a dramatic rock which towers over the bustling community below. The views from the top are simply sensational.

Sicily’s capital Palermo, Italy’s fifth largest metropolis and a thriving hub of the arts and cuisine, is only an hour away. Falcone-Borsellino airport connects the island with all of Europe’s major destinations in just a few hours.

This apartment with Sicilian ceramics is in an absolutely wonderful condition, the attention which has been paid to it evident in the stylish, timeless decoration and attention to detail. All documentation is in perfect order. You won’t have to budget for anything except the moving date (and we can recommend some great agencies).

Its wide range of heating and air conditioning options make it completely suitable as a year-round home. If you’re considering a full-time move to Sicily you should be aware of the tremendous opportunities available for expats to save thousands with very favourable tax regimes in Italy. The only structural improvement we can think of would be to add a layer of insulation to the roof, in order to improve heat retention and energy efficiency. Remember that this kind of work can be done at terrific value thanks to a range of innovative public subsidies.

If you like the area but this lovely apartment isn’t quite big enough for you, check out out our directory of carefully-selected listings to see all of the other properties on the market in Collesano and beyond. 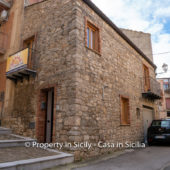 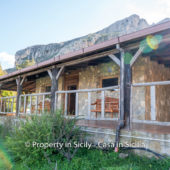