Casa Leonarda is a detached house in the beautiful setting Gratteri, of one of the Madonie Natural Park’s most beautiful villages. Built on four storeys, it was originally a pair of independent apartments which were united by a previous owner. Now comprising at least three bedrooms and three reception rooms, it offers approximately 170 m2 of internal space, plus a roof terrace with phenomenal panoramic views.

The house is in need of a comprehensive renovation, but with some magical traditional touches to retain, a fairytale setting and that wonderful open rooftop, it’s oozing with potential to be realised at the hands of a smart designer.

Whether as a gateway to the unique life of this inspirational island or an investment in its burgeoning tourist economy, this lovely house for sale in Sicily’s loveliest hills is ideally positioned to make your Mediterranean dream come true.

Casa Leonardo is built, like much of Gratteri, on a slope, and as previously mentioned was originally split in two. This combination of topography and history has created a pair of separate entrances.

The front door, on the main street, in fact opens straight onto half a flight of stairs heading up, and half a flight heading down, to what was in the past the lower apartment. Around the corner outside, and down a few stairs, a second door leads straight into what seems (from the front) like it should into a basement but is actually above ground on all but one side. Perhaps we should have christened this house ‘Casa Escher’!

This ‘true’ ground floor opens into a dining room, with an adjacent kitchen already tiled and plumbed to one side. To the other is a medium-sized bathroom with a shower. The smart marble stairs take us up, past the first door, to an entrance hall. On your right is the master bedroom, with beautiful majolica floor tiles and a full-length window opening onto a Juliet balcony

The hallway leads eventually to another bathroom, this time with a tub. Around the corner is a small bedroom – or a large study, depending on your needs. A large, centrally-positioned window keeps the space bright and fresh.

Climbing an unusual curving flight of stairs you come to the second floor, where you will find another large bedroom and a superb living room with twin balconies and more fabulous majolica tiles are a wonderful bonus of this house for sale. In Sicily, decorative ceramics have long been a key part of the cultural heritage, and the island’s capital, Palermo, has an entire museum devoted to the craft.

The top floor, other than a small lavatory, is given entirely to a single large room, directly under the gently sloping roof.  There is plenty of scope for creativity here – it would make a lovely second kitchen or living room, freeing up the double-balconied space downstairs to be a third double bedroom. The key feature of this room is that it leads directly onto the roof terrace, a neat, open space big enough to hold a small table and chairs. You won’t have quite enough space to to host a banquet under the stars, but with the view (over the roofs of the surrounding buildings) taking in most of this idyllic village and its green surrounding hills it would make a sensational spot for a Mediterranean breakfast – with a frothy, freshly-made cappuccino, of course!

The property is connected to the municipal gas supply, offering cheaper options for cooking and heating, without the need to change and replace cannisters, or to spend the typical €2500 on getting connected. In this part of the world this should not be taken for granted and is a distinct advantage of the property!

Casa Leonarda is in the oldest part of Gratteri, a hillside community of about four thousand inhabitants. It is just a stone’s throw from the viewpoint from which you get an unmatched panoramic view of the other side of the mountain, as the landscape unfolds in a tapestry of lush meadows, rocky outcrops and olive groves towards Palermo.

The street is very quiet and peaceful, with no passing traffic. Close to the edge of the town, you can feel like you’re in the countryside around a few corners, but none of the community’s shops, bars or amenities are more than a ten minute walk. You will find the neighbours friendly and welcoming, whether thanks to the legendary Sicilian hospitality or the growing little community of ex-pats, many of whom we have helped find and redevelop their beautiful new homes. We’d be delighted to make some introductions!

The region of the Madonie is a natural wonder with an equally abundant cultural heritage. Rising from the sandy beaches of the Tyrrhenian Sea to the north, up to half a dozen peaks above 1,800m, it is home to roe deer, wild boar, red kites and golden eagles. The native Madonie Fir gives a dramatic silhouette to its long slopes, and the entire region was designated a Geopark by UNESCO. Also under the protection of the Italian National Parks authority, it is strictly covenanted against new development, meaning that the serenity and natural beauty of your new surroundings is guaranteed to remain unspoilt as long as you live there.

Down at sea level is the majestic ‘pearl of the Tyrrhenian’, the beach town of Cefalù. In the lea of a mighty outcrop which was once the town’s natural defence against sea and invaders, it is now a gorgeous community built around fishing and tourism. You will adore the two kilometre strip of golden sand which runs along its elegant lungomare to the Medieval old town, and the spectacular Arab-Norman cathedral is not to be missed. Obviously, proximity to such a popular spot gives Casa Leonarda tremendous potential as a seasonal rental property.

The nearest city is Palermo, about an hour away by car. This burgeoning metropolis is re-inventing itself after a complex and sometimes notorious twentieth century, and is now rapidly becoming one of Europe’s leading city break destinations.

There is a lot of work to be done to properly renovate Casa Leonarda, to make it a truly comfortable modern home. The main priority is a revamp of the electrical and plumbing infrastructure, and at this stage it may be worth considering some kind of a heating system.

More cosmetically, the bathrooms will certainly be a priority, and the exterior will need to be redone. The roof is elderly and replacing it would ideally be on the to-do list as well. Some of the windows are in wood, and might be restored, but others are aluminium and will need to be changing.

The good news is that the floor plan and cadastral documentation are all accurate (not always, sadly, to be taken for granted when viewing a house for sale in Sicily). Also, while there is definitely some work to do on Casa Leonarda, there is plentiful raw material at your disposal. The beautiful, solid wooden doors are a lovely touch that connects the property to its history, and the antique bread oven on the top floor is also a great asset that you’ll surely want to integrate into your new design.

If you’re considering relocating to Sicily, be sure to pick our brains about the new residents tax schemes on offer, too. 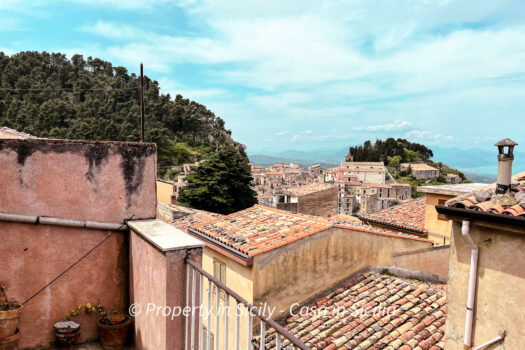 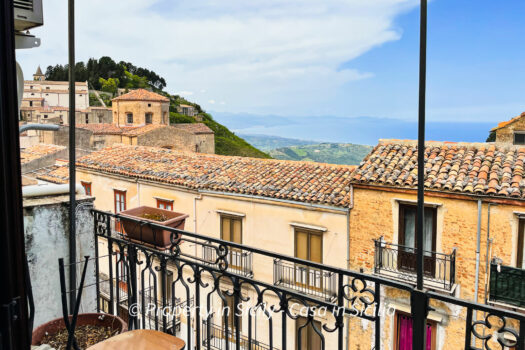 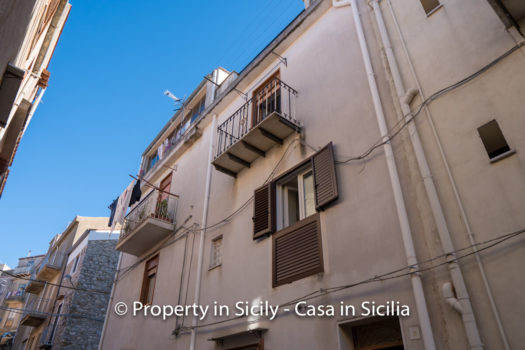 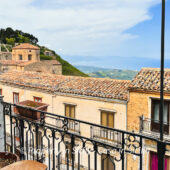